Twas the Night Before Christmas with a Twist! 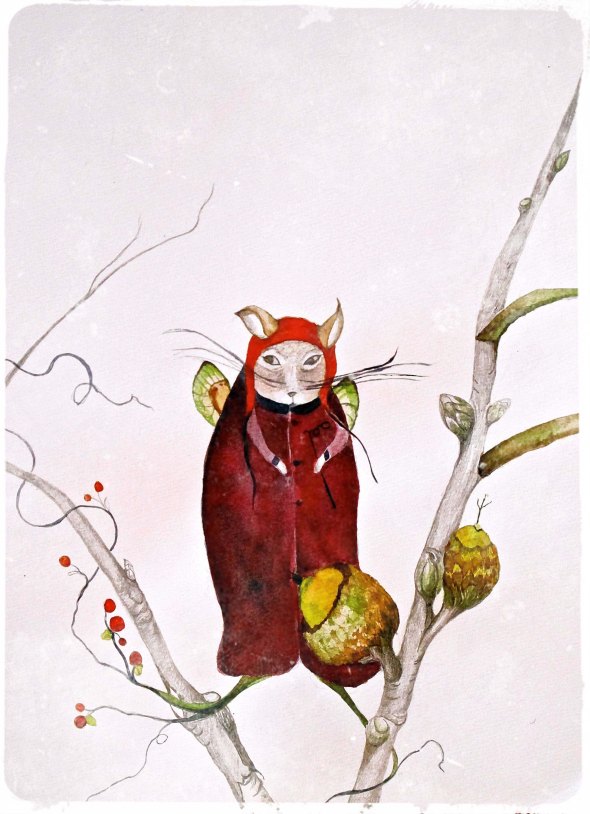 Watercolor and adaptation by Anastasia Traina ~ 2013~

Twas the night before Christmas, when all through the forest
Not a creature was stirring, not even a little tourist.
The old bitter-sweets were hung on the birches with care,
In hopes that Mr. Bertram B. Sweets would soon be there.

The Elfin-children were nestled all snug in their beds,
While visions of Mr. B. B. Sweets danced in their heads.
Why you know who he is, he’s the greatest, the expansive Acorn Keeper.
Not to be confused with the very grim reaper.

When out on the pond there arose such a clatter,
I sprang from the bough to see what was the matter.
Away to the Oak branch I flew like a flash,
Tore open the bark and threw up the downy ash.

The moon on the breast of the new-fallen snow
Gave the lustre of mid-day to woodland below.
When, what to my wondering eyes should appear,
But a miniature Souris de Fleur, bringing lots of good cheer.

With a little odd smile, all peppered with joy and peace,
I knew in a moment it must be Mr. Bertram B. Sweets.

He was dressed all in red, from his head to his foot,
And his clothes were all tarnished with compost and soot.
A bundle of fertilizer he had flung on his back,
And he looked like a peddler, just opening his pack.

His eyes-how they twinkled! His dimples how merry!
His cheeks were like roses, his nose like a cherry!
His droll little mouth was drawn up like a bow,
And the beard of his chin was as white as the snow.

He was chubby and plump, a right jolly old elf,
And I laughed when I saw him, in spite of myself!
A wink of his eye and a twist of his head,
Soon gave me to know I had nothing to dread.

He spoke not a word, but went straight to his work,
And tucked all the flowers in, then turned with a jerk.
And laying his finger aside of his nose,
And giving a nod, up in the sky he rose!

He sprang to his pea pod, and then gave a whistle,
And away he flew like the down of a thistle.
But I heard him exclaim, ‘ere he drove out of sight,
“Happy Christmas to all, and to all a good winter’s night!”

Here is wishing you Joy, Good Health, and may all your dreams come true in 2014!

The Unrequited Love of Drucilla Constance and Juno Fritz!

Drucilla Constance was smitten with an adventuresome huntsman named Junious Fritz
Who had a magic and bewitching bird-heart, unfortunately, there was an invisible hitch ~
Constance’s mother was a grabby, grubbing and gluttonous, witch!
Which certainly wasn’t going to bode well for young Mr. Fritz

Yes indeed, you guessed it right, the old witch had a definite plan!
Even more mischievous than the most mischievous gingerbread man
For make no mistake, she wanted that magic bird-heart, even more than she wanted, well, the capital of Saipan!

So by some arm-twisting and quite a bit of pinching, she forced poor Drucilla to meet her young beau by the pudding pie tree,
With a tangy tart made from the fruit of a most poisonous orange and green colored bee!
Which as you might not have guessed, smelled as sour as a Siberian stinky-winged pea!

Although, the Young Huntsman took no notice as his breast violently fluttered thrice
Out flew his bird-heart like a strange electromagnetic-al device
And within two minutes his heavy head was plopped upon a patch of Spanish cabbage and Chinese fried rice.